The Tube Challenge: 270 Stations! Did we do it?

On Friday 4th April Team Bob set off on the mad tube challenge to visit all 270 London tube stops in one day! Yes, including rush hours. With very little time to spare we made it and we hit our target! A big thank you to our supporters! Here’s how it panned out… 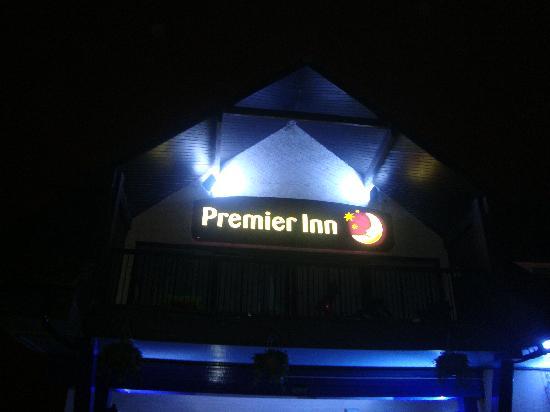 We arrived the night before, excited by the challenge we decided to have a couple of drinks in the deserted bar before retiring for an early night. Similar to a bunch of naughty school kids this ended up with bubbles, beer and conversation into the wee hours. We were all tucked up in bed by 3.20am, a little exuberant and worse for wear.

Our train was to leave at 5.15am sharp and if we missed any of the trains planned it would be a potential disaster for the schedule. We met Geoff (@geofftech) and his team (Chris & Matt) who together in August 2013 managed to achieve the current Guinness World Record for visiting all 270 tube stations in the fastest time. Chris, the ‘route-master’ had put together a route that was more ‘group friendly’ than the record breaker and was similar to the record breaking route of 2009 and an animation can be seen here and is well worth the watch if you want to get a feel of how mental the route was! 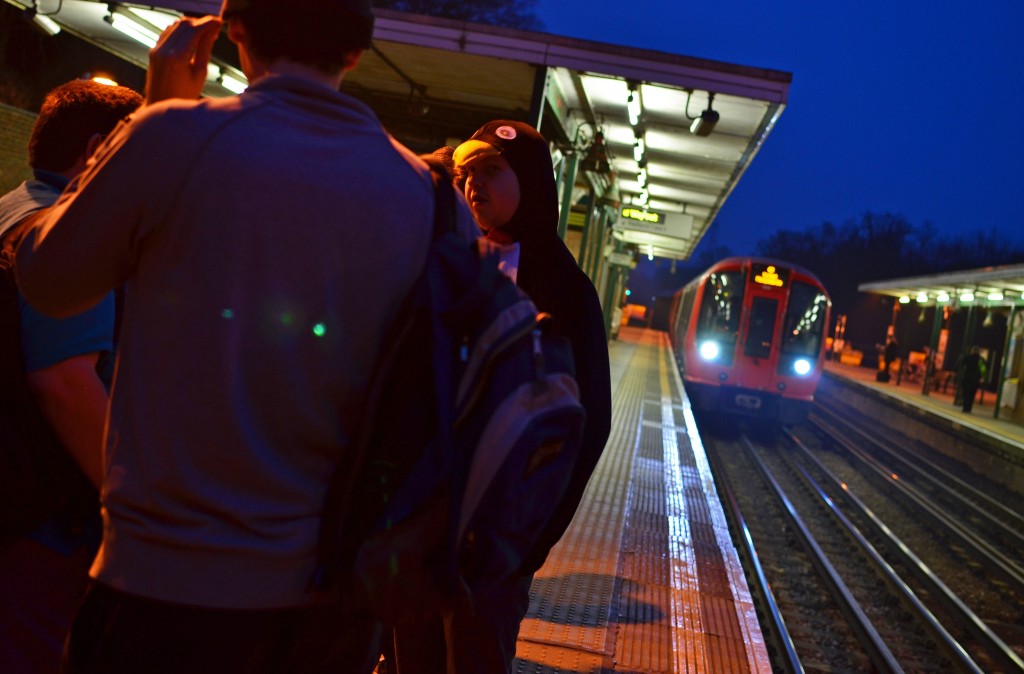 First Train of the Day

A penguin (lets call her Penguin B) leaves the train to take a photo.

The doors close on the first tube of the day and a penguin is left behind. Doh!

A Penguin is reunited with its flock at Moor Park. 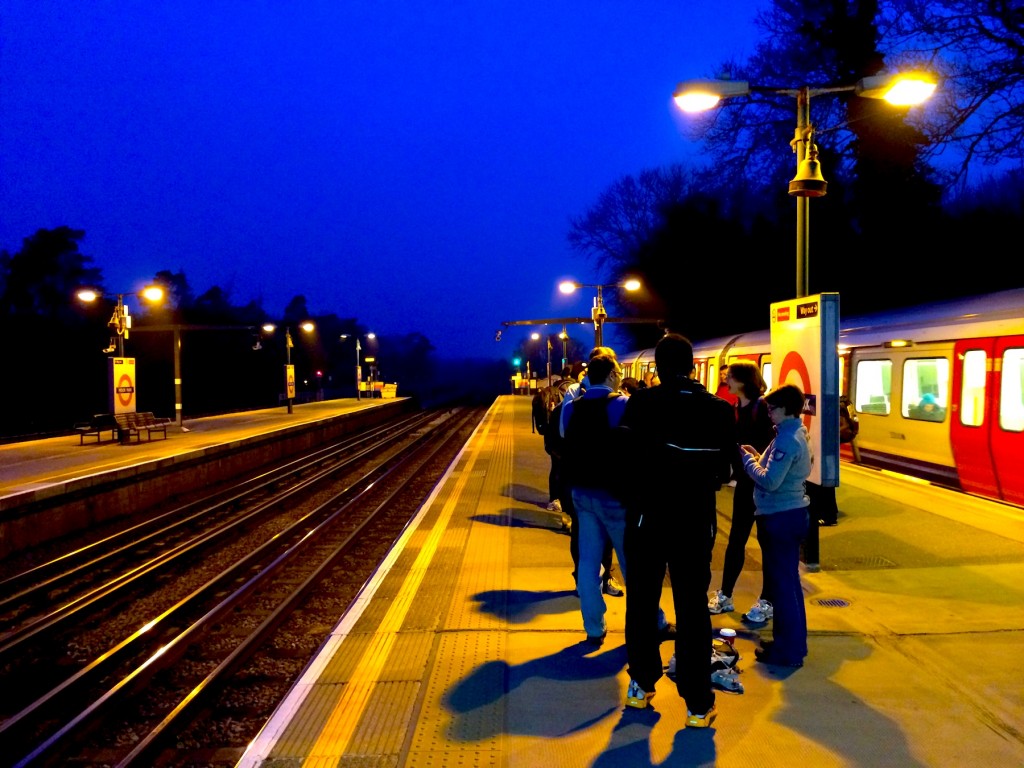 Second Change of the Day & a Penguin reunion

After doing stints on the Metropolitan Line, Piccadilly Line, Central and District its time to knock the Bakerloo Line down. Time for a nap and some lunch! 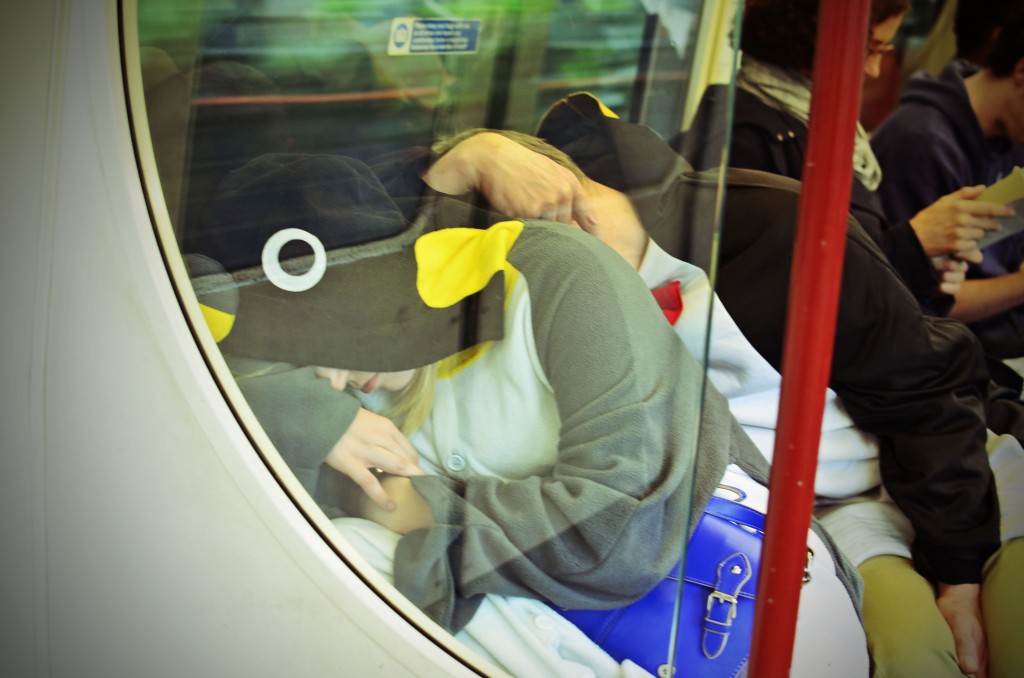 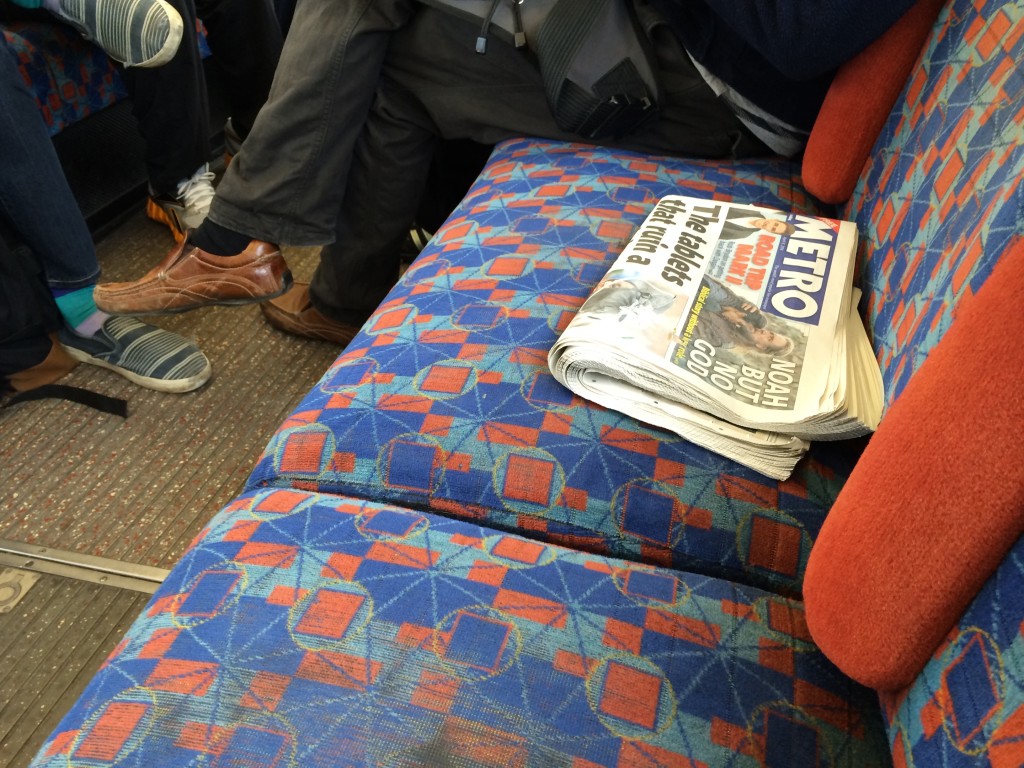 An interview on BBC London 94.9 FM with Vanessa Feltz! 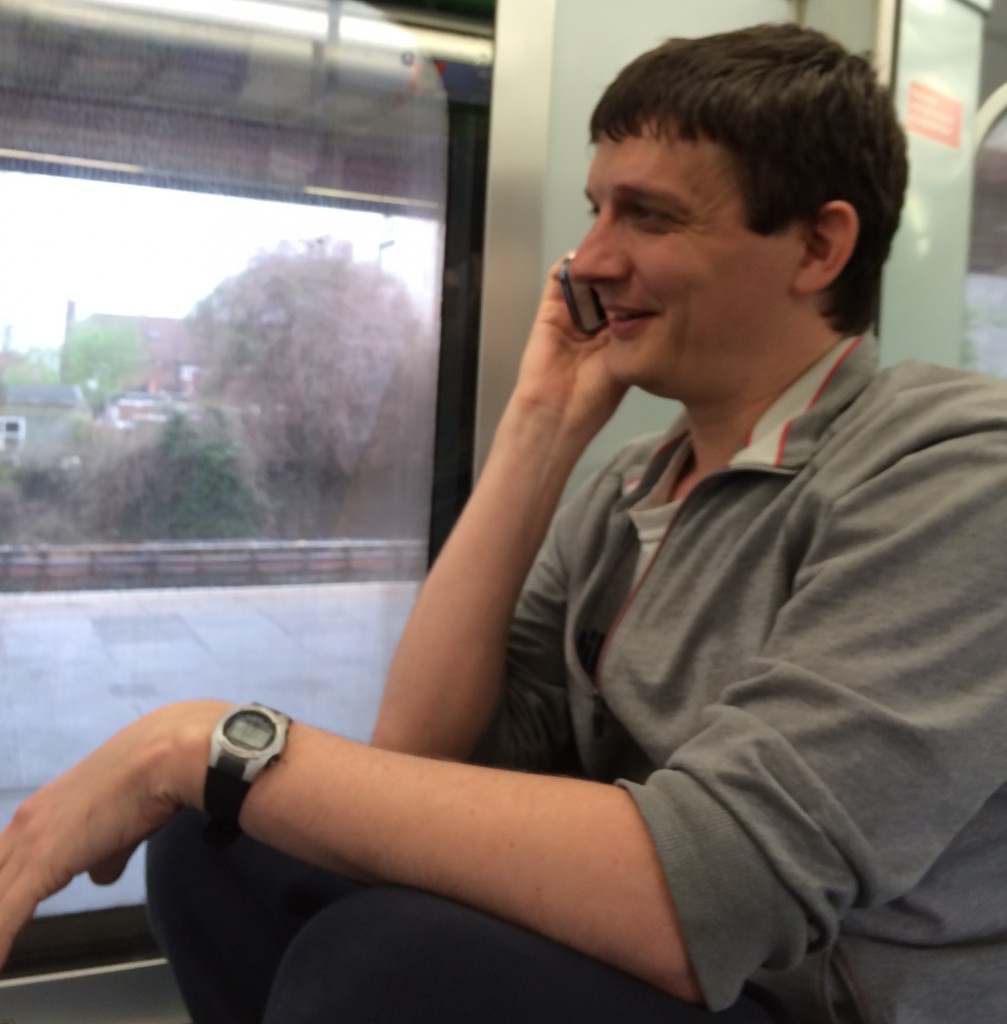 12.15pm – Definitely should have packed a lunch!

What a way to bring up the 100 station mark – doughnuts brought to us by @SteveRob5 ‘s friend. For once it wasn’t a noise complaint that brought the police over. What was that about cops & doughnuts??? 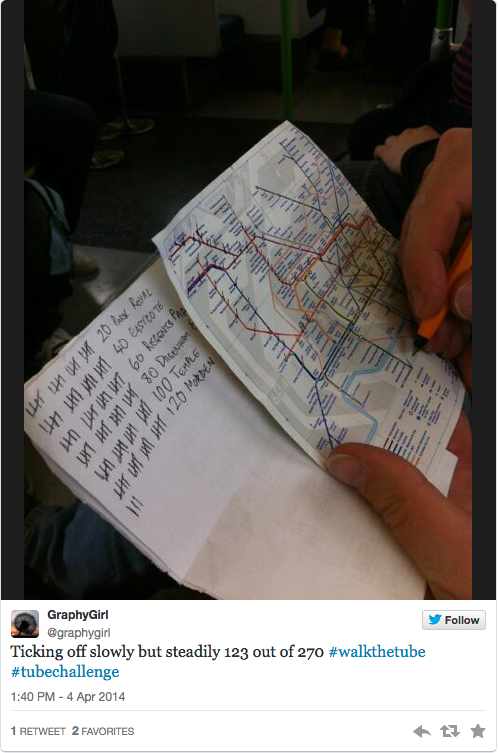 Half WAAAAAAAAYYYY!!! through the tube challenge. Finally!!! Plenty more to go though 🙁

The inevitable madness overtakes everyone: 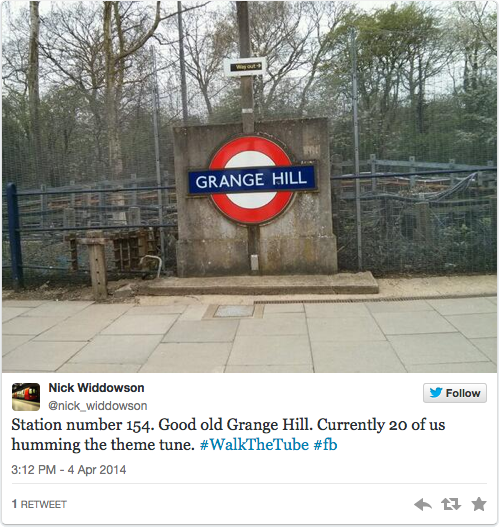 Can you spot the odd thing about this photo??

Right, think we’ve done everything an iPhone can do on this journey…… Wait – no there’s still camera filters to play with! Ahhh…. Everyone remembers their first time in Epping

And the inevitable announcement: Severe delays on the Jubilee Line

What we weren’t waiting for…..

Legs burning from our 5th sprinting “#walkthetube” connection and we’re starting to wonder if the right hash tag has been chosen for the day. 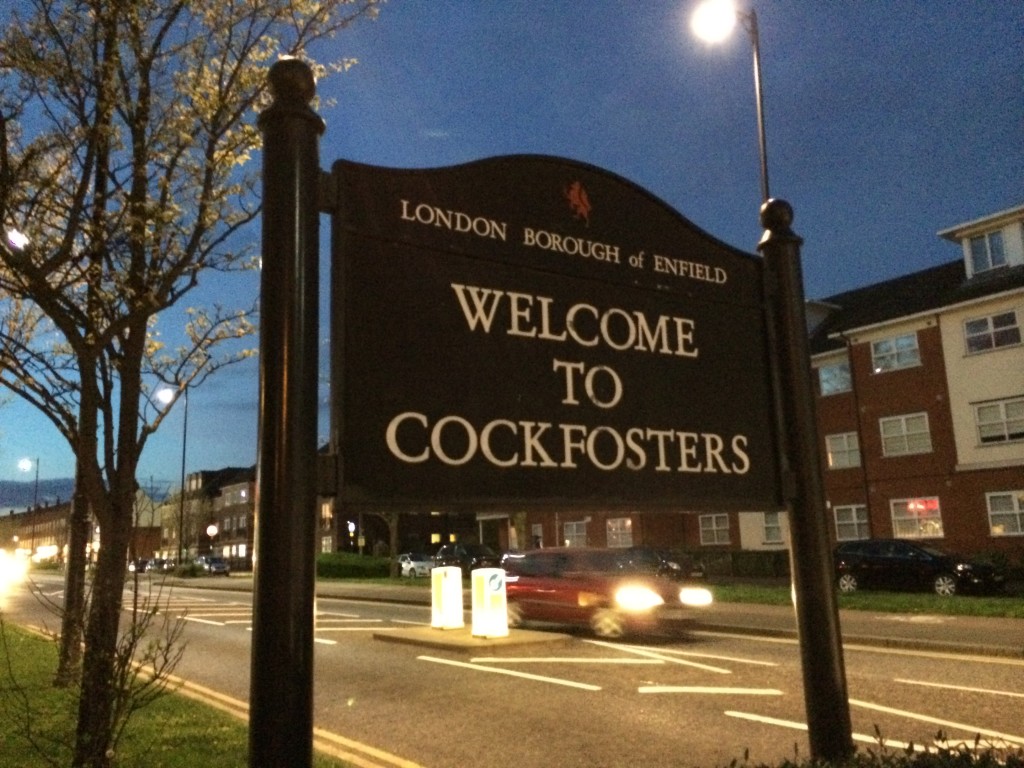 Some last minute strategy decisions – it’s getting tight – one more loo break and we won’t make it to all the stations!! Legs crossed to the finish line. 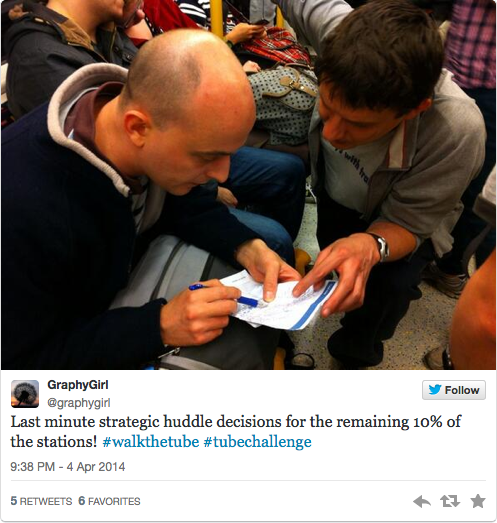 Tough for a few members of team bob  visihome station at 10.25 after 17 hours on the tube…. and 45 minutes sleep the night before…. aarrrrrrgghhhh! Let me out of here!

The end is near! Heathrow Terminal 4 next stop and some happy faces in there! We made it at last Why did we do it? ducation are close to our hearts so we sponsor Ousman (a young Gambian boy) to go to international school.

Although we reached our target we like to get him new shoes and clothes when we can to keep his confidence up in class! Find out more and donate here.

And did love blossom? Only time will tell….