The city beneath our feet holds a fascination for many Londoners. The allure of this stygian realm is evident whenever tours of Aldwych station or Brunel’s Thames tunnel are announced, and immediately sell out.

Londonist editor-at-large Matt Brown has gained privileged access to many of these mysterious tunnels over the years, and here shares a few favourites.

1. A walk under the Thames Barrier 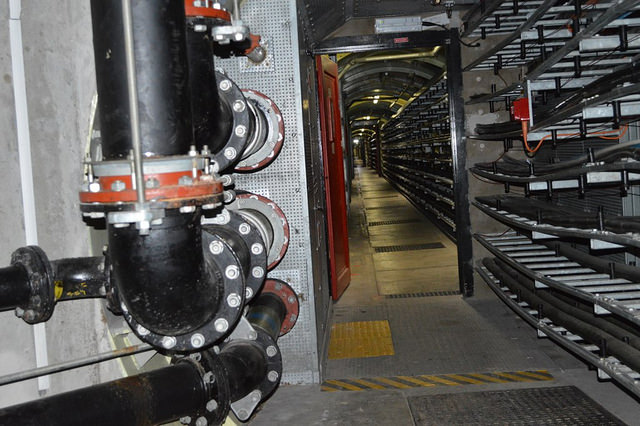 These twin routes allow engineers ready access to machinery in the barrier’s silvery piers, which would otherwise require a boat. The barrier is too important to fail, so every system has its back-ups — this is why two tunnels were bored rather than one.

2. The love tunnel beneath Pall Mall 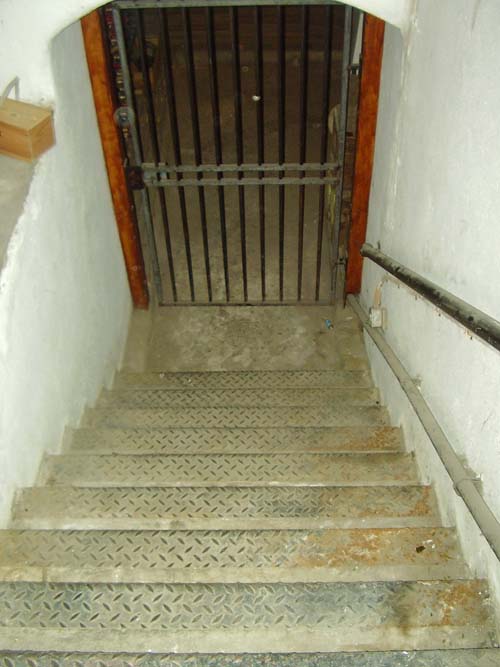 Berry Brothers and Rudd on St James’s Street has purveyed fine wine’s to London’s nobility for centuries. Its premises are full of obscure wonders: one of its walls originally bounded a Tudor tennis court; while a giant set of scales has weighed every notable customer from Pitt the Younger to Chris Tarrant. Its basement goes deep, and far.

One section contains a bricked-up tunnel, which is believed to run underneath Pall Mall to St James’s Palace. Legend has it that merry monarch Charles II would use the tunnel to pass unobserved from his palace to the high-class brothel that formerly occupied the site. 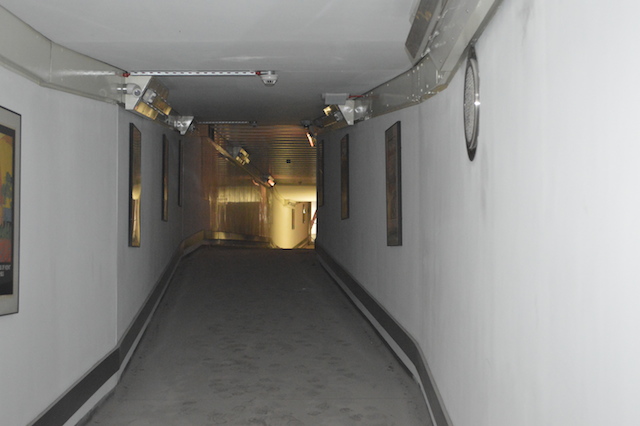 Euston Road is a right bugger to cross, unless you use the underpasses at St Pancras or Euston Square. Did you know that there are two additional (though private) ways to walk beneath the street? The first is technically under Marylebone Road, the western continuation. It links together those two private parks that sit between Regent’s Park and Portland Place. Only keyholders can gain access.

The second, shown above, connects the Wellcome Trust building to a property across the road, formerly owned by the Trust. It’s lined with old tube posters for some reason. The hump you can see in the middle is a bridge over the Circle Line tracks below. 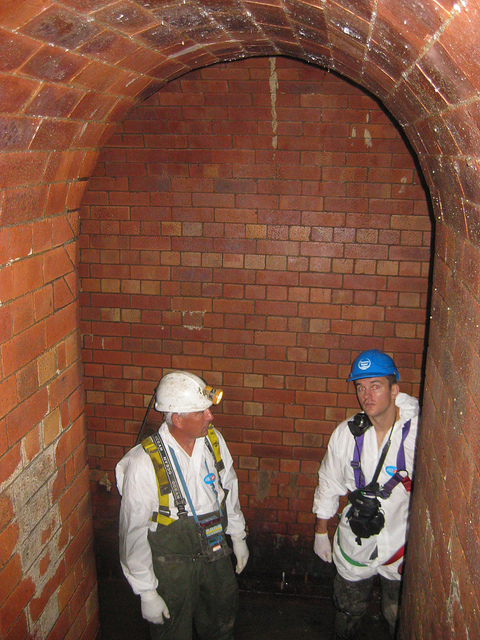 The River Fleet once flowed from Hampstead Heath through King’s Cross and on down to Blackfriars. It still does, only now its waters run brown and turdy with sewer water.

The photo above was taken directly beneath Holborn Viaduct, where the Fleet bifurcates into two channels. It’s not as smelly as you might think — the overriding whiff is of detergent and soap… a bit like musty laundry that’s been left in the machine too long. 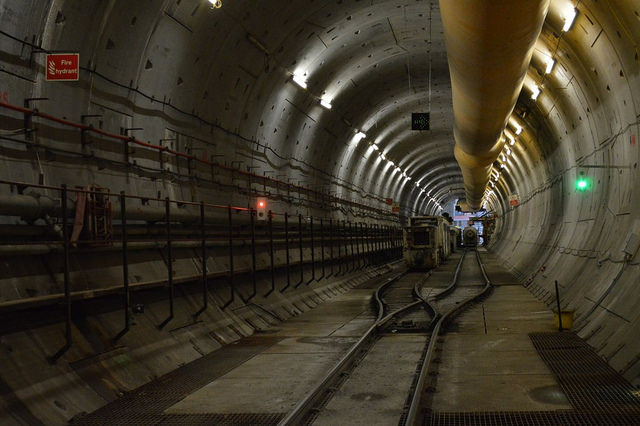 London’s deepest tunnel will also be its least-seen. This four-mile sewer runs from Abbey Mills to Beckton, up to 80 metres below the surface. It will carry millions of tonnes of crap that would otherwise have been dumped into the River Lee.

Once it’s up and running in early 2016, it’s unlikely to be accessed by humans again for another 10 years. So unless you’re prepared for a feculent SCUBA dive, you ain’t ever going to see it. 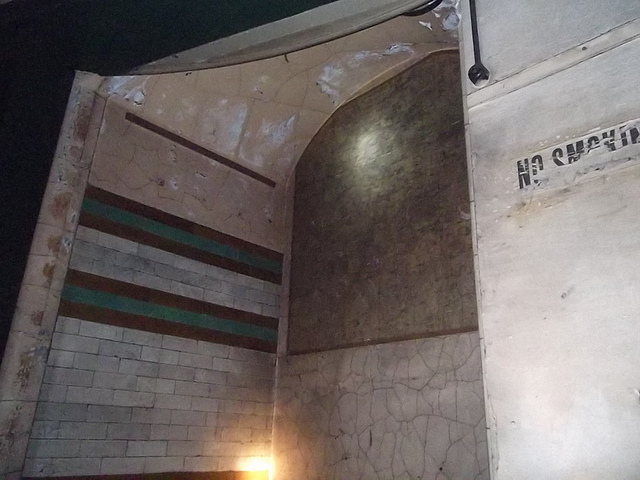 London has many ‘ghost stations’, tube stops that once welcomed passengers but are now out of use. Perhaps the most interesting is Brompton Road near the V&A, formerly on the Piccadilly Line. It closed 80 years ago and fell into the hands of the Ministry of Defence.

During the Second World War, the station was used as an HQ for those planning the air defences of London. 1940s maps showing gun emplacements remain on the walls to this day. The property was recently sold to an undisclosed buyer from Ukraine, and it’s future is uncertain. Trams ran along most of London’s major roads until 1952. Most of the infrastructure is long gone, but the former tram tunnel still runs north-south along Kingsway. Bizarrely, it was once used as a flood-defence centre for the capital.

Today, it’s used mostly as a storage area for Camden Council’s road teams. The photo above shows the author in the tunnel in 2009, for some reason clutching a framed photograph of Arthur Bostrom, the policeman from ‘Allo ‘Allo! 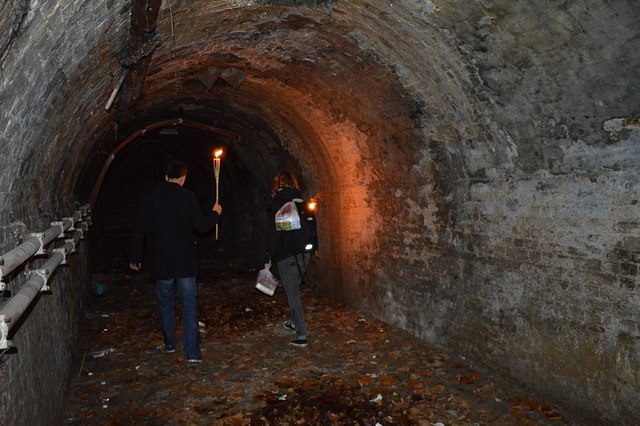 Ever explored Stables Market in Camden Town? The maze of passages is but the tip of a vermiculated iceberg. An even more extensive set of tunnels and chambers runs underneath the southern sections of the market area, the remains of stabling from the days when horses were used to pull wagons and canal boats.

Technically, the catacombs are off-limits, but a doughty explorer can gain access by kayak from an opening on Regent’s Canal known as Dead Dog’s Hole. 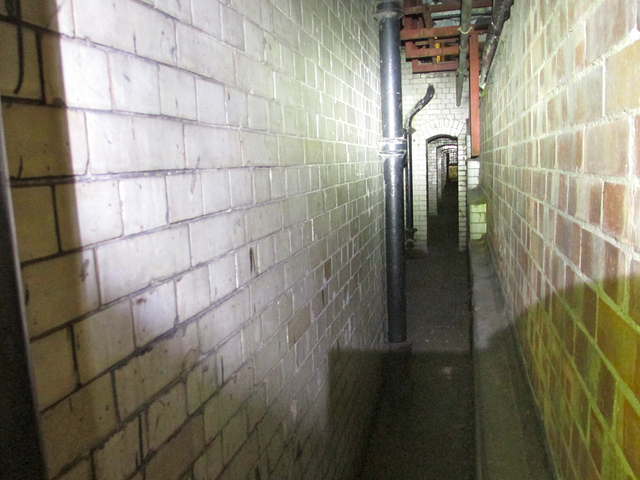 Speaking of dead things… Dead Man’s Walk is a passage-cum-tunnel at the back of the Old Bailey, off limits to the public. It’s a relic from the days of the notorious Newgate Gaol, which previously stood on this site. Condemned criminals would walk along the passage on the way to the private gallows.

The passage contains a series of brick arches that get progressively narrower as the gallows site is approached. It must have been a terrifying final walk for the doomed of Newgate. 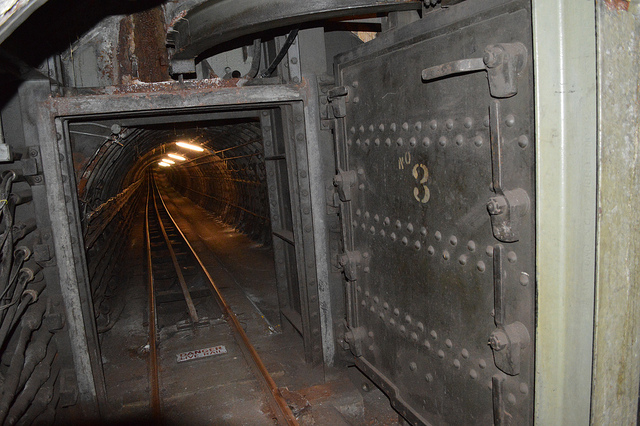 To end on a positive note, I finish with a set of tunnels that you might get the chance to see in a few years’ time. Mail Rail was the post office’s private tube line, which carried parcels from Paddington to Whitechapel until 2003. It’s remained in mothballs ever since.

However, the Post Office Museum and Archive has exciting plans to open the Clerkenwell section up to visitors by the end of the decade. You might even get to ride a loop beneath Mount Pleasant sorting office. The shot above shows one of the steel flood doors within this section.

London contains many other secret tunnels, including government passages beneath Whitehall, deep-level tube shelters and communications and utility tunnels. Which would you most like to explore?